At the AGM it was suggested that we identify “Twenty Quick Wins” that we could advocate for improving the conditions for cyclists in Loughborough. Stephen Watson agreed to co-ordinate these, so if you have any suggestions please email stephen.watson@leic.org.uk .

A couple of examples already on the list are:

With the increase in traffic following the further expansion of the South Loughborough housing estate and the opening of Aldi and associated businesses, the crossing of Allendale road for cyclists and pedestrians is becoming much more challenging, particularly as drivers turn off the roundabout at speed and without signalling.

We are in the process of writing to the County Council on the matter, particularly as this route is heavily used by students travelling to Rawlins Academy.

A cyclist based in Quorn has contacted us about a recent near collision. She sent this to the County Council. 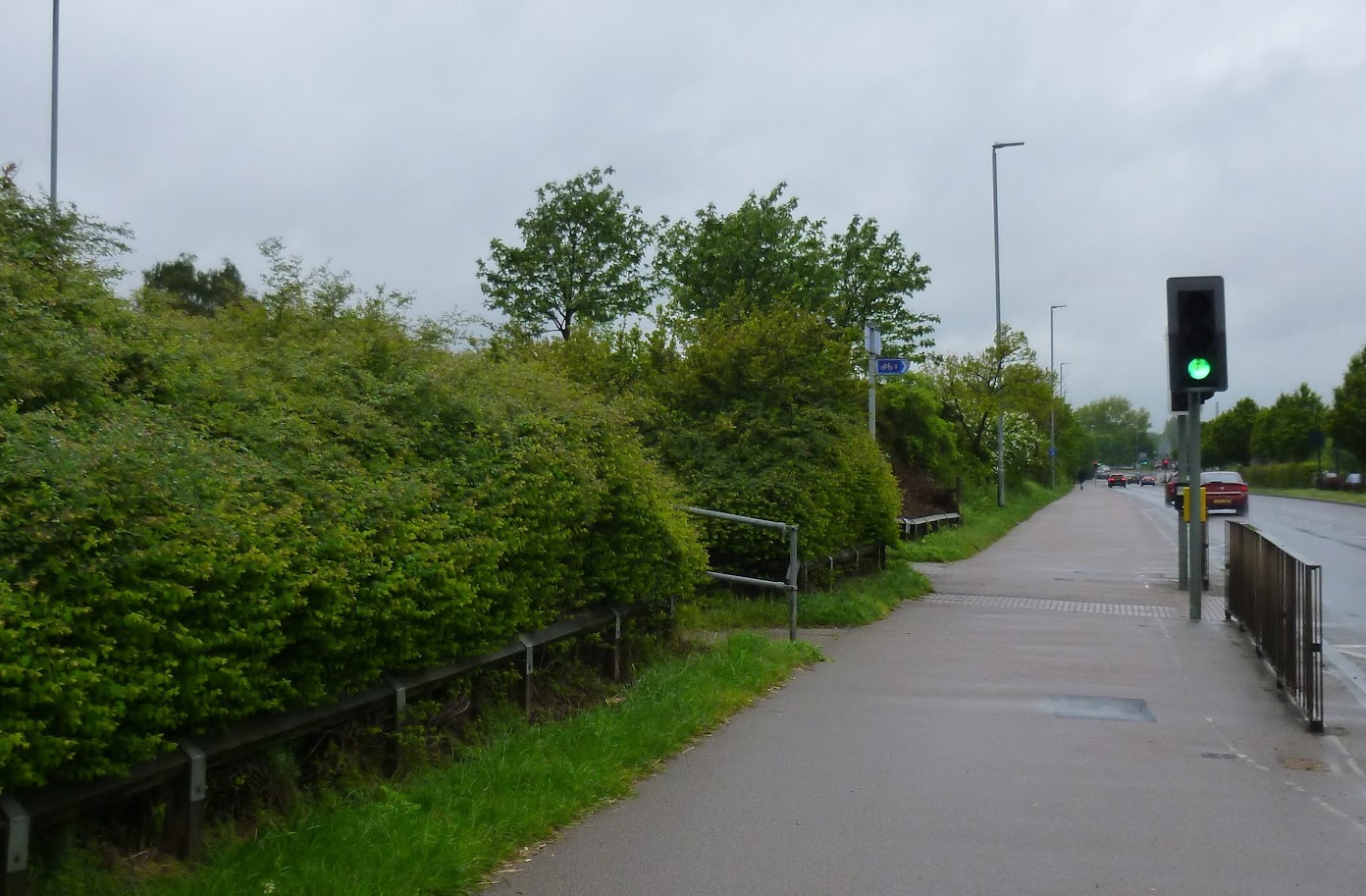 "I wish to make a suggestion.

There is one spot on the Epinal Way in Loughborough at which a path leads at right angles directly onto the Epinal Way pavement/cycle path. It leads direct to pedestrian lights where people cross.

I was cycling along this morning into Loughborough when a small child ran out in front of me from this path. I took evasive action, came off my bike and now have multiple bruises and a ruined pair of trousers. The child was not hit.

Please could I suggest that a sign is put up where the footpath meets the cycle path, saying - "stop, look, cyclists passing". Neither adults or children consider they have to beware as they enter Epinal Way because they're moving onto a pavement, but this is also a cycle path, and therefore potentially dangerous.

This is not the first time I have met someone coming onto the pavement/cycle path here; it's just this time I have been hurt, although not seriously. If I had not braked and swerved, the child could have been hit and possibly badly hurt.

I do hope you will take action about this."

Some quotes from the response -

“There is an onus on pedestrians as they enter the shared facilities on Epinal Way to show due care and attention and not just to step out onto the shared cycleway/ footway on Epinal Way.

We are restricted as to what further measures we can put in due to cost and legislation. We are only able to put up prescribed signs on the highway and there is nothing available that is a recognised sign to warn of pedestrians entering a shared use cycle lane.

Most people who cycle on Epinal Way will use it on a regular basis and will be familiar with the surroundings and know where there are accesses and where people may be coming out. Most cyclists will show due care and attention by giving such accesses a wider birth. However they would tend to pay less heed to any warning signs or lining due to familiarity.

The situation you describe is not uncommon and it relies on cyclists cycling in a considerate manner and pedestrians being aware.

It has been suggested that, at little cost, the vegetation could be cut back and grass verges established for a few yards on both sides of the junction to allow approaching cyclists and pedestrians to view each other. An obstructed sight line would not be considered acceptable for motorists on the roads.

The County Council response has been "..regarding the overgrown vegetation. The Highways Inspector has advised that the hedge on this stretch of the road belongs to Charnwood Borough Council. This issue has been passed to them requesting this is cut back to aid visibility." A response from Charnwood is awaited.

There will be a short presentation on air quality and its role in promoting cycling. It is also hoped to discuss the role of E Bike hire schemes.

The event will include campaign updates and lessons learnt from campaign groups attending.

The afternoon session will include a visit to Bike Back Derby, run by Life Cycle who offer training and recycled bikes. There will be a ride alongside NCN R6 to Derby's Velodrome and then the national standard BMX track.

The East Midlands Cycle Forum brings together cycle campaigners from across the region. All are welcome at this meeting: active campaigners, interested parties and local authority officers.

The cost is £5 per attendee to cover lunch and the hire of the room. The Waterfall is directly opposite the main entrance to Derby train station. Details at https://www.eventbrite.co.uk/e/east-midlands-cycle-forum-tickets-60143340350 .

A study reported in Accident Analysis & Prevention has found that

Perversely, bearing in mind the threat level, the larger the vehicle, the closer it tended to pass.

An on-road observational study was conducted in Victoria, Australia. Participants had a custom device installed on their bicycle and rode as per their usual cycling for one to two weeks. This measured the lateral distance between the end of the bicycle handlebars and the passing motor vehicle. Sixty cyclists recorded 18,527 passing events over 422 trips. The median passing distance was 173 cm.

This goes to confirm previous research that had shown the where bike lanes had been painted on the road, motorists would tend to drive to the line rather than adjusting their position to give the cyclist adequate space. Hence any painted bicycle lane of less than 1.5m in width may increase the risk to cyclists rather than ameliorate it.

It also highlights that one of the best ways of increasing the safety of cycling would be the reduction/elimination of on street parking.

In 2017, the Government published their first ever Cycling and Walking Investment Strategy. The strategy aims to double cycle use by 2025 and make cycling and walking the natural choice for short journeys or for parts of a longer journey.

Currently, despite asking councils to produce Local Cycling and Walking Infrastructure Plans, there is no guarantee of funding to build any of the infrastructure identified in their plans. This means that, for authorities receiving technical support, their plans risk gathering dust. And, for the majority that are not receiving support, there is no incentive for a council to invest time and resources in producing an Local Cycling and Walking Infrastructure Plan.

Cycling UK, Living Streets and Sustrans are calling on the Government to establish dedicated funding for councils to use to build infrastructure identified in their plans.

The Government says there is £1.2bn available for local authorities to spend on cycling and walking. But the reality is that most of the money is either not exclusively for that purpose, is only available for specific local authorities, or is poorly spent. But crucially there is no pot of funding specifically for councils to implement their plan or begin constructing some priority schemes.

As the Autumn Statement approaches, it is hoped that Ministers will recognise the opportunity they have to put meat on the bare bones of the Cycling and Walking Investment Strategy. But the campaign needs public support.