from Tim Birkinshaw (image from Google) 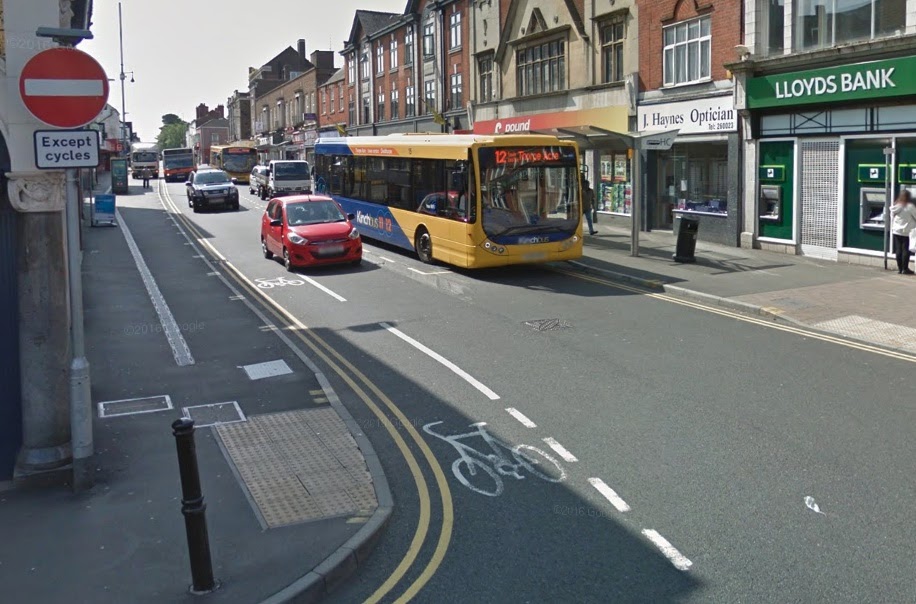 Has anyone else had problems with the cycle lane (and cycling) in Loughborough High St?

I often use High St. in both directions (as I have done for nearly 30 years), it is very handy for the market, but I have had a number of incidents there since the changes nearly three years ago. I was attacked there recently by an irate motorist who thought he could force his way through too small a gap. (I didn't get his number as someone intervened to stop him going further.)

I was assured by an official at County Hall, soon after the changes were made, that this stretch of road is two-way for the full length from Denhams to the Woodgate traffic lights, despite the 'No Entry' sign on the corner of Baxtergate; all the signage fits with this. (No one-way signs or arrows and a cycle route sign for southbound cyclists.)

However when the bus stands and the unloading bay down one side are occupied (as they often are) the remaining width of road is too narrow for a vehicle to safely pass a cycle coming the other way. Cars (and vans) come down High St. at considerable speed (mostly rat-running), and buses pull out, so on several occasions I have been faced with on oncoming vehicle, and insufficient room. The situation isn't helped by the stub of a cycle lane which ends very suddenly outside the estate agents.

I don't think the layout was properly thought through when Market Place was closed to through traffic three years ago and High St. narrowed.

I don't see many cyclists using High St. now; I am not surprised. I am not sure what to suggest, apart from re-widening the road. Maybe 'priority to oncoming traffic' signs, a longer marked cycle lane or the central white line continued for the full length of the road would be possible answers.

(based on an article in Cycling UK Cycle Campaign News)

Farook Yusuf Bhikhu, the taxi driver convicted of permitting the ‘car dooring’ which led to the death of cyclist Sam Boulton, has had his appeal rejected by Leicester Crown Court.

Bhikhu was convicted of the offence of ‘car dooring’ in June, and fined £955. Now that he’s lost his appeal, a further cost of £300 has been awarded against him.

Cycle campaigners and Sam’s family want to see more public awareness on the dangers of car dooring, and the Government to introduce a new offence with tougher penalties. See the report in the Leicester Mercury .

Pedalling the pounds away

A new study by the University of Copenhagen has found that cycling to work is just as effective for losing weight as going to the gym five times a week. 130 overweight people took part in the study and those who commuted to work by bike shed almost as much weight as those who embarked on a specific weight-fitness regime. So, as long as you don't eat lots of cake in the office, commuting to work by bike could help you lose pounds.

Statistics from the road casualty reports 2016

(based on an article in Cycling UK Cycle Campaign News)

A report from Halfords, some of it based on a YouGov survey, caught the attention of both the pro- and anti-cycling media recently for mentioning that 59% of respondents ‘back the introduction of number plates for cyclists’. Unfortunately, the authors of 'Sharing the Road' didn’t point out the huge impracticalities and costs of such a scheme, and the extra barriers it would inevitably put in the way of the healthy activity of cycling.

The Government has released its guidance to schools on the doubled School Sport Premium in England with an additional £160 million per year for schools to spend on increasing physical activity.

In addition to doubling the funding that primary schools receive to improve the quality of their PE and sport provision from £160 million to £320 million a year, the Department for Education have published details of the individual allocations at school level and funding guidance for this scheme.

One of the ways a school can choose to spend the premium is to "embed physical activity into the school day through active travel to and from school, active playgrounds and active teaching".

Since this encouraging more walking and cycling would also reduce the problem of traffic congestion outside schools at the start and end of the day, it is to be hoped that most schools will use part of this budget to promote these modes of active travel.

Over the last few years the Poplar cycling club (formed in 2014 as a sister club of Loughborough Poplar running club due to its founders not finding any cycling clubs in and around the Loughborough area) has steadily increased in popularity. (Ed. This is somewhat ironic as Loughborough Cyclists’ Touring Club closed down at around this time).

The main aim of the club is to promote social riding that anyone can get involved in whilst still providing something for the more advanced riders. They have three groups that go out from Loughborough - advanced, intermediate and beginners.

Anyone is welcome to join the beginners group, regardless of how fit they are, while the advanced group which undertakes faster, hillier or longer ride than the others. The objective is that participants will always be able to find a ride that is right for them and the club welcomes anyone who would like to join them on any of their rides. They endeavour not to lose or drop any riders.

The club has recently formed an off road mountain bike group which rides on Monday evenings in the summer, usually out towards Beacon hill and Swithland woods.

Details of their routes and rides, together with more information about the club, can be found here.

The club appears to be entirely based around the website and has its own colours, but does not appear to be affiliated to either British Cycling or Cycling UK.

Hundreds of local cyclists will meet at Belton Village Hall (weather permitting) on Sunday 17th December 2017 (10.30am to 12-30pm), most having ridden from their home towns and cities for refreshments and a chinwag in the warm. There is a raffle in aid of Rainbows Children's Hospice. £600 was raised for the Hospice in 2016 plus £300 for the Cyclists’ Defence Fund.

All cyclists are welcome. More volunteers are still needed for this year’s event, so if you can help please let John Catt know.

A bit out of our area, but possibly of interest to members who like to explore, is the project to restore the Bennerley Viaduct.

Our neighbouring campaign group in Nottingham, Pedals, is one of several local groups involved in the Friends of Bennerley Viaduct working with Sustrans to restore this major structure between Ilkeston and Awsworth, with a walkway /cycleway over the top and linking to both sides of the Erewash Valley Trail.

One of only two remaining wrought-iron viaducts in England, Bennerley Viaduct is a grade II* # listed structure dating from 1877 and spanning the Erewash Valley for 440 metres between Cotmanhay in Derbyshire and Awsworth in Nottinghamshire. The viaduct deck is some 18 metres above the River Erewash. The Friends of Bennerley Viaduct are dedicated to restoring, conserving and celebrating this impressive structure and supporting Sustrans with their plans to give it a new lease of life as a cyclepath and footpath.

The Rediscovering Bennerley Viaduct Project has been funded by the Heritage Lottery Fund. If you are interest you can find out more about this project here.
# Grade II* buildings are particularly important buildings of more than special interest